I WAS very sorry to hear that Window Coffee in Wensum Street shut down at the end of July. It was undoubtedly the best coffee shop in Norwich. I had interviewed Hayley Draper for my next book. Here's what you would have read:

"Somehow squeezed in between a kebab joint and an estate agent, you could easily overlook Hayley Draper’s cafe.
For a start The Window Coffee is tiny. Really tiny. Something like 12ft by 10ft. That means there’s only room for about half a dozen people around the coffee table. But sheer proximity does funny things to you.  It’s virtually impossible to ignore your neighbour here – and Hayley is adept at finding the right thread to draw two strangers together.
But the sense of instant community is just a nice side effect. Really, it’s all about the coffee and Hayley knows her stuff. Above the adverts for “flavoursome house blends” are certificates from a recent UK Barista of the Year awards ceremony.  She’s come a long way since she made her first coffee in a café in Diss aged 14. She did try other jobs, but nothing else gave her the same buzz.
“This is what makes me happy,” she says with a simple shrug.
The Window Coffee at 25 Wensum Street was born in February 2009 and it’s gone from strength to strength.
“I don’t have to do any marketing now,” she says. “People come to me. If you put ‘best coffee in Norwich’ into Google I pop up. Google, Trip Advisor, the internet is very important.”
Hang around for a while and you start to see the secrets of her success. There’s a constant flow of chatter with the mocha and the lattes. There are no “Have a Nice Day” platitudes, just the thrill of proper conversation.
The grinder grinds, the steam wand froths and you notice that the small Mona Lisa in the window carries a flat white in her hand. No wonder her smile is enigmatic. The ipod is on “shuffle”. Something Adele-ish follows something Chopin-ish. Another double decker roars past.


“Good things happen after good coffee” runs the slogan on another wall. Hayley Draper was clearly in her element."
Posted by Steve Silk at 21:55 2 comments: 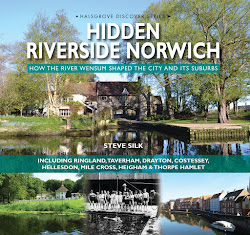